Earlier this year Knapp Valley Gardens Landscape Designer Mike VanderPloeg was awarded the MNLA Merit Award in the Residential Design/Build Category for his design for the Otis resident. 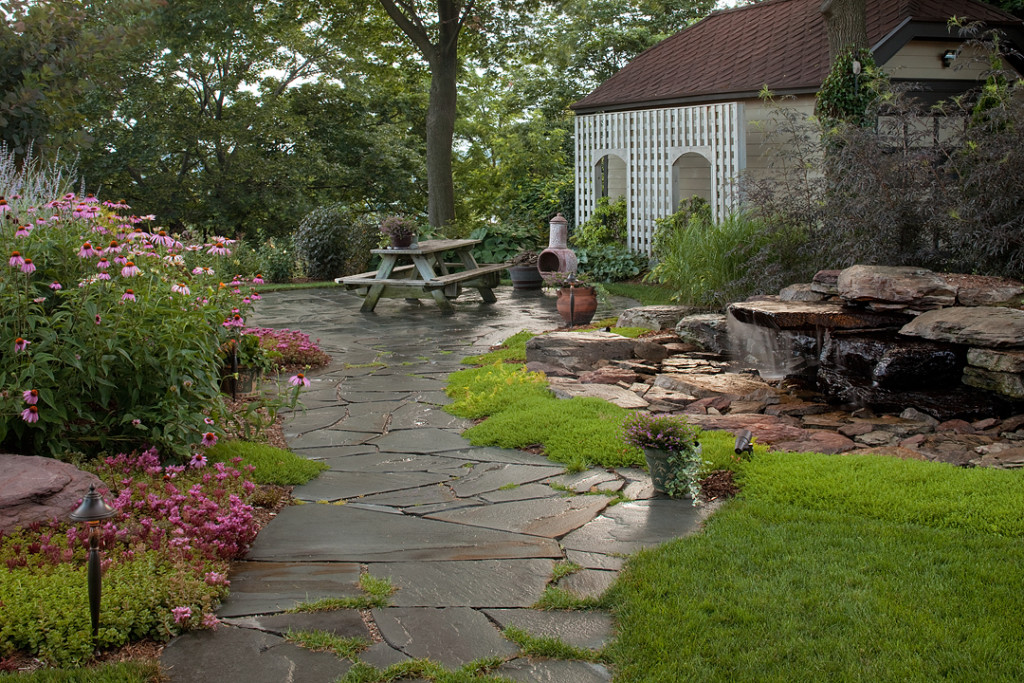 The Michigan Nursery and Landscape Association Industry Awards Program recognizes and honors those in the green industry who have demonstrated excellence, professionalism and responsible environmental standards in the areas of Residential and Commercial Design/Build, Installation, and Management and Special Projects.

This site overlooks the skyline of Grand Rapids in an area of older homes, many of which have been remodeled and re-landscaped to take advantage of their prime location and appreciating values. Critical to the project was keeping the site lines of the downtown area open. Working with and around the carpenters, the additions were started in spring of 2007 and continued into the summer. 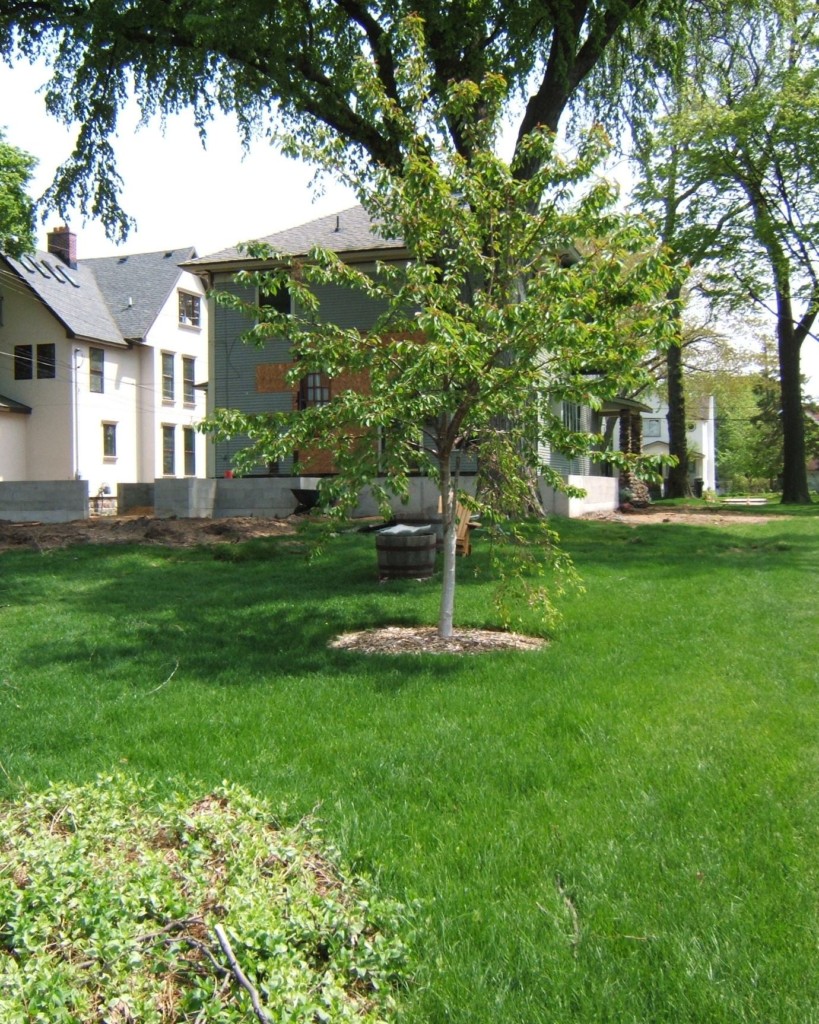 The homeowner was looking for a landscape that would compliment his extensive renovations and in doing so create a tranquil oasis, a beautiful garden, and a nicely manicured lawn which he could work and enjoy. The site preparation required removal of some overgrown shrubs and unhealthy trees. The grades worked well with the additions put on the existing home. In turn natural walkways with a couple of stone steps were decided on. A large patio was a requirement in his backyard as it is a popular place for gatherings on the 4th of July for firework displays, as well as a meeting place for neighborhood functions. Being an older home with lots of character, bluestone was a perfect match. The patio and landing off the additional steps is patterned bluestone with the walkway being irregular bluestone. The materials were installed on a compacted base with joints filled with stone dust.

A water feature was decided on to add ambiance in the setting. The location was critical as the homeowner wanted to have site lines from the house as well as the patio. Elevations worked out well with grades coming off the neighbor’s driveway and Pennsylvania fieldstone was used for retaining purposes. This stone comes from the same quarry and fit in well with the bluestone. A pond-less reservoir was decided on as the homeowner wanted as little maintenance as possible on the water feature. The soothing sounds of the falling water softened the sounds of the downtown area. 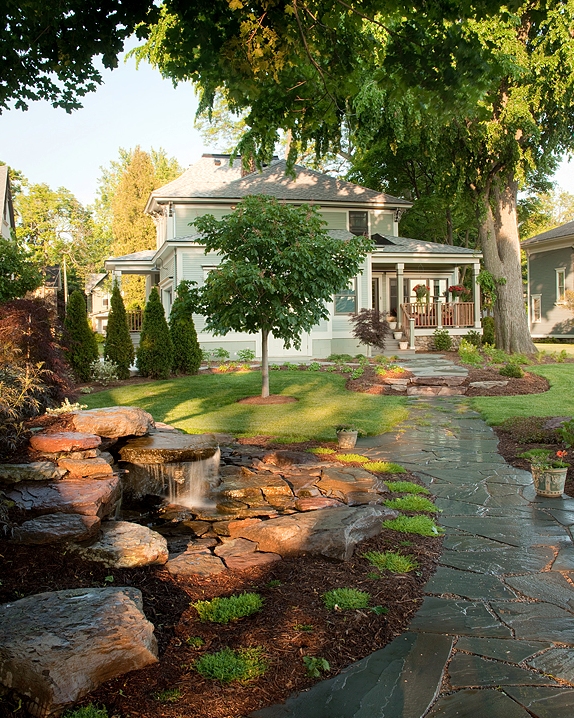 Plantings and slight berms were used to create a garden that would add privacy which the house lacked, and incorporate seasonal color and textural effects. The owner is an avid gardener who was up for the challenge of learning about and doing his part in the garden including care and maintenance of a wide variety of plants in the gardens composition. Also, a custom trellis of cedar was built and installed on site to soften the neighbor’s garage. Japanese Pieris was used in conjunction with the trellis to add another element of plant interest. The lawn may have been his most important requirement as his father worked for a lawn seed company many years ago. The finest bluegrass blend was used along with extra care in the lawn installation. In addition, a high quality low voltage lighting system was installed along with a chiminea for nighttime ambiance.

The homeowner currently does most of the maintenance himself outside of spring mulching and fertilizing of the landscape beds. Water feature maintenance consists of putting in the pump in the spring and taking it out in fall. An algae preventative is used occasionally to stop the buildup of algae.

The design and landscape installation has worked out well for the homeowner. He and his friends spend much time working and relaxing in his backyard garden. 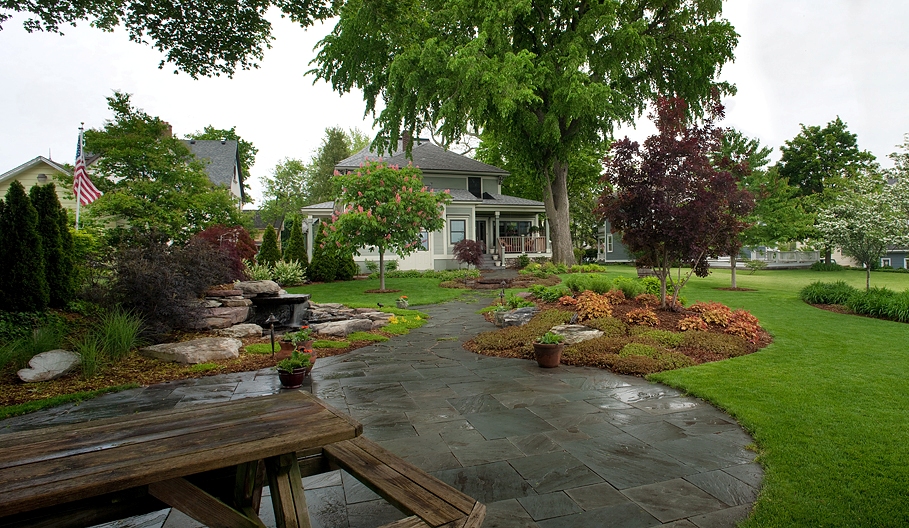 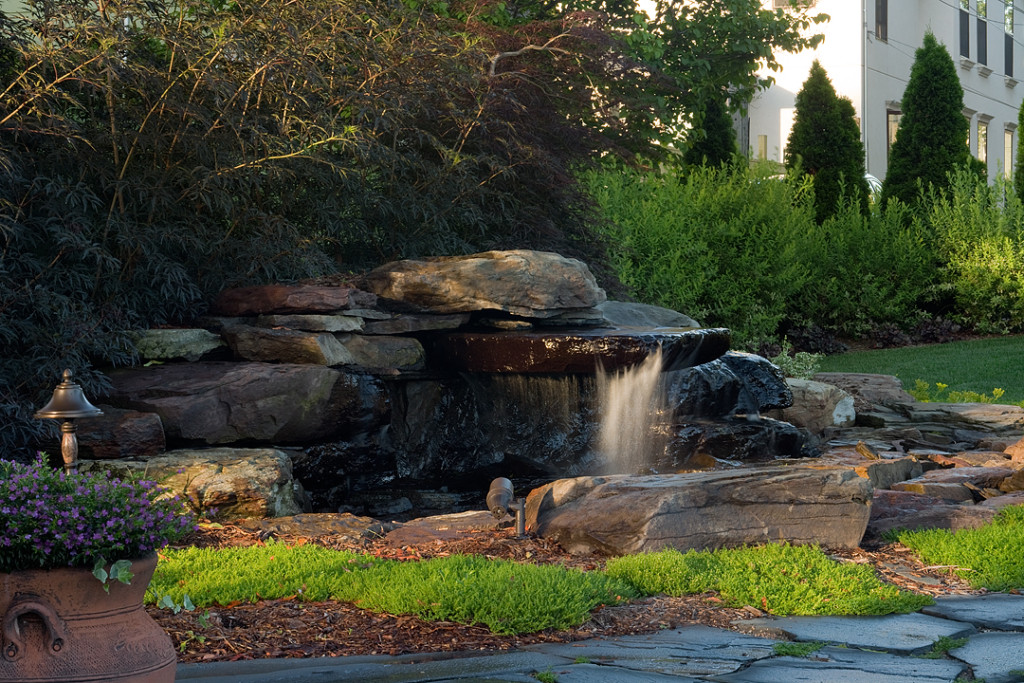 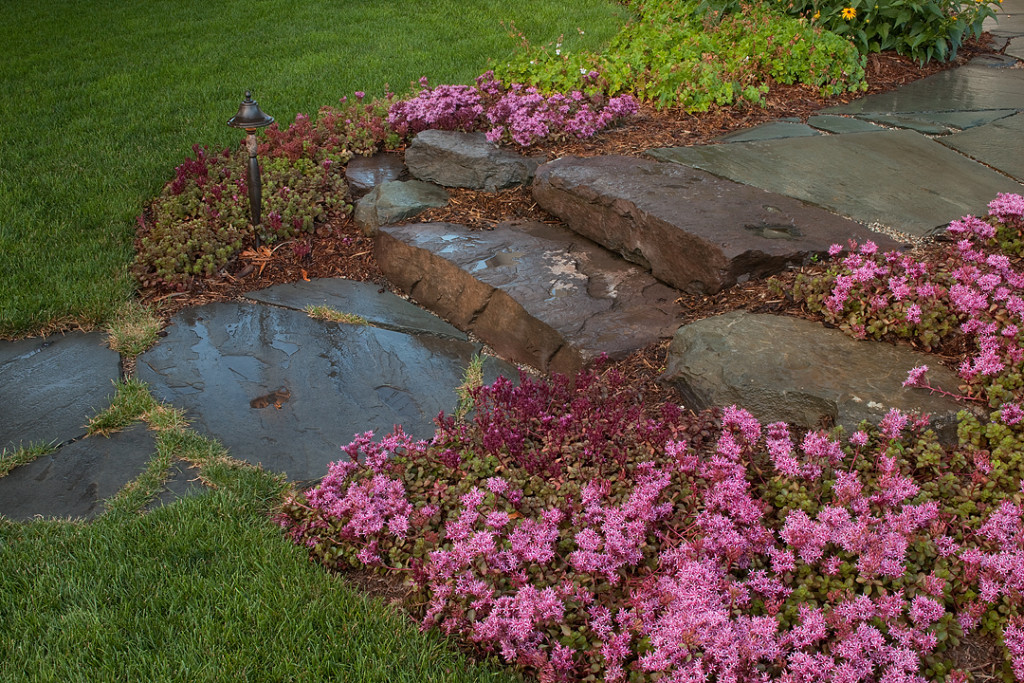